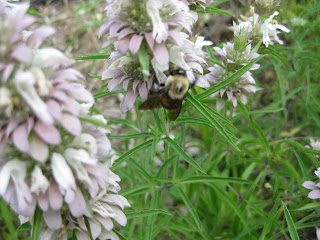 Description: Bee Balm is a native Texas annual wildflower in the mint family of plants(there are perennial species as well).   Its leaves are arranged opposite to one another along its square stems that are crowned with dense clusters of brightly colored flowers that vary from pink to lavender to yellow in color in Central Texas.  Some species of the flowers are accentuated with spots.  Bee Balm grows 1 foot to 3 ft tall and can sometimes dominate fields in late spring.  The plants are highly aromatic and also known as wild oregano, wild bergamot or even horsemint.  Intensity of its pungent flavor varies by species.
Growth Habit: Bee Balm is found throughout sunny well-drained prairieland and fields around Central Texas.  It prefers warmer weather and does well into early summer in FULL sun.   Bee Balm spreads easily from seed around gardens and yards and is a welcome addition, attracting butterflies and bees. Allowing it to grow among your summer vegetable gardens is not only an attractive Native addition but an effective repellent to unwanted pests due to its volatile oils  that extend into its roots.

Harvesting:   Bee Balm begins to bloom May.  I tend to harvest it in May or June.   As a wildcrafter, or wild-harvester I tend to find that central texas harvests vary with temperature and rainfal.  Make sure to gather the annuals while they are going to seed so it can be spread for the following year. 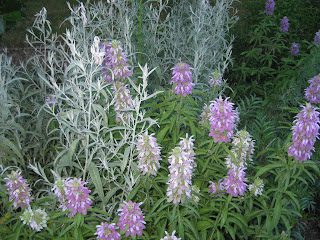 Historical Use:   In small amounts, it can be used as a culinary spice like oregano.  Bee Balm has a long history of use by different tribal communities throughout North America.  Great care was taken by tribes to distinguish between the various species and different tribes had different favorites.  Settlers used it but it never became popular in use until the species Monarda punctata,  was  grown commercially as a a source of Thymol, which is used as a disinfectant and in put into products like mouthwash
I also know Bee Balm as Margaret’s Herb.  Margaret White was a wonderful Central Texas herbalist who recently passed on.  She used the plant for everything including furniture polish.
Modern Use: MAIN THING TO REMEMEBR: HEAT CLEARING In North American  herbal medicine Bee Balm is either dried and used for tea, or preserved fresh in alcohol in what is called a tincture.   It also extracts well into honey and oil.   Internally Bee Balm has properties that encourage the body to sweat.  It has the ability to draw heat and infection out of the body, even infections that are lodged in organs.  Its use also ranges to helping to settle the nerves, especially sense organs and provide more clarity.  Topically, it is a powerful germ killer, and can be used on wounds and even on tough fungal infections.
Clinical Experience: In my practice Monarda is one of my favorite sore throat remedies.  One of my favorite ways to use it is as a honey.  Stuffing a jar with flowers, cover with raw local honey, and let it sit for a couple of weeks.  This will render a delicious and spicy sore throat remedy. It is also an ingredient in an antifungal salve that I make. Any time I feel a tickle in the throat I take a tspn of monarda honey and the tickle clears.  One herbalist applied it after getting burned in the kitchen cooking and reported that the sting immediately cleared up.
This year I used it as a main ingredient in a formula I made for someone with mono.  It was the only thing that offered her symptomatic relief.  She also recovered from her infection in record time.

Dosage is dependant on the individual and that individual’s situation