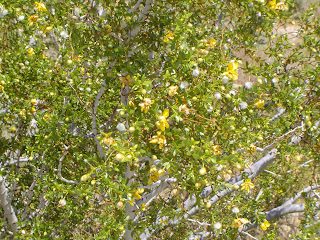 Chaparral, or Larrea tridentata One of the tribal names for this plant is “shegoi” or “mother of all plants” Family Zygophyllaceae Description:  It is an evergreen shrub growing to about 6 ft tall and up to 8 ft wide.  The stems of the plant bear resinous, dark green leaves with two leaflets joined at the […]

One of the tribal names for this plant is “shegoi” or “mother of all plants”
Family Zygophyllaceae
Description:  It is an evergreen shrub growing to about 6 ft tall and up to 8 ft wide.  The stems of the plant bear resinous, dark green leaves with two leaflets joined at the base.  I has small yellow 5-petal flowers. Galls may form by the activity of the creosote gall midge. The whole plant exhibits a characteristic odor of creosote, from which the common name derives. Mature plants, however, can tolerate extreme drought stress. The most memorable part of the plant to me is the smell.  The smell is damp yet piercing like a kind of muddy pine smell that permeates the air.  There is no way to mask the smell in preparations.
Habitat: Creosote Bosu is found growing wild Throughout the warm North American deserts, from Nevada to central México, up to 1600 m (5200 ft) in elevation.  Wild, It makes its way into West Texas. I have seen it planted and growing well in Central Texas.  It is exceptionally drought tolerant. .  It stops competition by several methods, including releasing an inhibitory substance into the soil.  You can see that there are no other plants growing around the bushes so if you plant this it must be taken into account
Harvest: The leaves of Larrea can be harvested throuout the year
Historical Use:  Larrea plants that are currently living, actually started growing before the Pyramids and the Great Wall of China existed. This plant was one of the first to grow back after the 1962 nuclear bomb test at Yucca Flats.  It is strong in many respects.  It contains a substance known as (NDGA); this is an anticancer agent and a potent antioxidant.  It is also an extremely powerful antimicrobial, able to kill many germs. This same substance is controversial and may have negative effects on the liver and spleen so do your research before using.

He is also quoted on Henrietta Kress’s site as saying “As far as it not being available in the health food industry…a bunch of WEANIES! “  there is a great explaqnation on her site of his breakdown of the politics behind why it was taken off the market.
Preparations:  Chaparral is used as a tea/wash/tincture, powder and oil.
Clinical Use  I use Chaparral mostly topically or internally to help cleanse.  One woman with stomach cancer had me collect for her when it went off the market, and she said it was keeping her alive.  Topically,I use it to relieve burns, get rid of foot odor, shrink skin growths, and for all general skin condiditons.  I make both a spray and salve with it.  In fact, I would say it is one of the most vitally important skin remedies known.  It kills infections, scavenges free radical, soothes skin and even kills parasitic and fungal infections.  Larrea is a lovely weed to bring into your first aid cabinet.