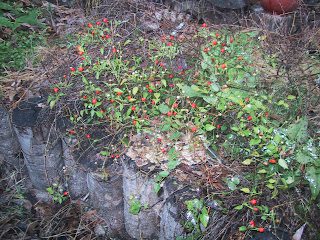 Chile Pepper or Capsicum annuum and C. frutescens. Chile is derived from the nahuatl tribe’s name for pepper.  It was misnamed a pepper when Columbus thought it was a red pepper, instead of the black pepper he was familiar with.  The two are not related. Family: Solanaceae Description:  There many varieties of both perennial and […]

Chile Pepper or Capsicum annuum and C. frutescens.
Chile is derived from the nahuatl tribe’s name for pepper.  It was misnamed a pepper when Columbus thought it was a red pepper, instead of the black pepper he was familiar with.  The two are not related.
Family: Solanaceae
Description:  There many varieties of both perennial and annual shrubs all over the world. Cayenne pepper comes from the fruits of small berried species of C. frutescens, the perennial types. Most of these species have densely branching stems, sometimes purple-tinged, alternate leaves, dark green above, lighter on the underside, and white flowers borne singly, or in pairs or threes, in axils. The plant averages 60cm (2ft) in height, some African varieties being smaller. The podlike berries appear in countless different sizes, shapes and colours, In Central Texas peppers grow easily in out of the garden.  Freezes will kill or cause them to die back.  The native pepper of our region is known and chile pequin and forms dense shrubs of tiny peppers that pack quite a punch.  These shrubs can grow up to 4 ft in height and diameter
Habitat: The greatest concentrations of peppers are found in North South America, India, the Philippines. In Central Texas, wild chile peppers can be found growing around the edges of woodlands.
Harvest:  Chile Peppers are harvested when the berry ripens.  Most Green Peppers sold are unripe. If you harvest take care not to get any juice on your hands.

History:  Some Indian customs are to hang a few chiles with a lemon over the threshold of a residence to deter evil. Chiles are also used to ward off the evil eye.  Peppers are high in vitamin c, much higher than oranges and are best known for their capsaicin, the isolate that gives them there spice and to which they are measured by.  Hey have  long history of use medicinally. The Mayas used them to treat asthma, coughs, and sore throats. The Aztecs used chile pungency to relieve toothaches.   peppers are used internally as a stimulant to circulation and to help relieve gas and other stomach upset in small amounts. Externally Chile is best known for its pain relieving effects.  It will cause a slight reddening of the skin.

Preparations: Chile peppers can be extracted into water, alcohol, and oil.
Clinical Use:  I like to add chile peppers into my sinus clearing remedies.  I have found some people react more strongly to the herb internally than others so it is a good idea to eat before taking it as a remedy internally.  I have used in tiny pinches to treat shock(as long as you know the person isn’t allergic to peppers!!!) and it can also stop bleeding.  Internally, Texans are pretty versed in what happens when you have to much capsicum internally, so there are some definite limits.  Externally I use chile pepper in my menstrual salve to help relieve pain.  External applications can be found at many health food stores.