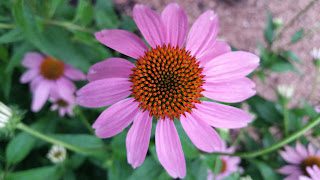 (Following are common names for Echinacea sp.: Echincacea,
Purple Coneflower, Comb Flower, Black Sampson, Missouri Snakeroot, Kansas
Snakeroot, Indian Head, Cock Up Hat, Droops, Hedgehog, Red Sunflower, Scurvy
Root, Rattlesnake Weed).
Energetics: a wet, cooling, spicy and sweet plant (from
Wildflower personal proving), which moves downward and inward (Proving).
Primary actions: Lymph mover, Blood purifier, Immune
modulator
Notable indications: start of cold (common knowledge),
inability to get well (Proving), snakebite (Bergner ix, Hobbs 5), old injuries
(old spider bite, etc) (common knowledge), back pain (especially relating to
dehydrated discs) (Proving), inability to move forward (Proving), toothache
(Hobbs), sore throat (Hobbs), lymph congestion (DW), digestive issues (Hobbs
8), skin conditions (Dandelion Revolution).
Emotions associated: Joy
Historical Use:
This plant is native to the Americas, especially to
territory currently contained in the United States, and is known to be used
historically and contemporarily by Plains Indians (Hobbs 5, conversations with
other herbalists), for both medical and sacred uses.  Lewis and Clark shipped Echinacea to the East
Coast from the Great Plains c. 1804 (Kindscher), and outsiders first took note
in of the plant in 1870, after German physician Meyer began selling an herbal
formula containing Echinacea as “Meyer’s Blood Purifier” (Hobbs 7), and famously
offered in 1887 to prove its efficacy by letting a snake bite him prior to
taking the formula to resolve the bite’s poisons (Bergner ix).  By 1907 it was the most popular herb among
physicians (Hobbs 9).
***
Apologizes to this marvelous herb, but I resisted him at
first.  This showy plant has his portrait
on the cover of so many journals and magazines, and has so many studies (over
300, according to Christopher Hobbs) (3) testing his properties.  Nearly anyone who has ever taken an herb,
even for something as silly as a cold, has taken Echinacea, and even folk who
don’t believe in herbs at least know it is meant to have something to do with
the immune system.  It appeared to me to
be the Justin Bieber of herbs – flashy, over-adored, popular, and without much
substance — which was enough for me to already dislike him.
Christopher Hobbs says that “echinacea’s amazing action was
eventually explained with the discovery of the immune system, because the herb
strengthens the body’s ability to resist infection and poisoning” (3).
The name Echinacea was given by a botanist in 1794,
and is a modification of the Greek word “echinos” which means sea-urchin or
hedgehog.  Hobbs says that this is
because of the plant’s “sea urchin-like cone” (7); however I will go further
and say that this origin and especially the strange-sounding “Echinacea”
variation also call to mind an other-worldly and perhaps powerful
creature.  This also relates to images
found during the Proving.  There is
something of the sea (wet, like this herb), and of other unknown worlds (warm,
like this herb), in this plant.
Echinacea does in fact effect the immune system, and
“strengthens the body’s own antibiotic and antiviral activity” (Bergner
x).  It increases phagocytes (Hobbs
8).  Paul Bergner says that the Eclectics
saw “’bad blood’ as the most important underlying condition that called for
Echinacea”  (37), and herbalist DW says
that “Echinacea is first and foremost for the lymphatic system (interview).”  Michael Tierra notes that it also indibits
the enzyme hyalurinadase (which bacteria secrete to form pus and break cell
walls)  (191).  [I also had arranged to meet with a second
herbalist but unfortunately at the last minute she was not able to provide the
interview.]
Echinacea purpurea is our bioregional Echinacea, and is the
one many local people have planted in their gardens.  Horizon Herbs notes on its website that
cultivation of purpurea in the garden “takes the strain off” of wild
angustifolia.  Outsiders do not record
Native people using this species for snakebite, but at least two local
herbalists have assured me that it is just as good as angustifolia for this
purpose – although I have yet to talk to anyone who has actually used this
species for this indication (herbalists I know that have actually used
Echinacea to treat snakebite have all used angustifolia).
Through discussions with local herbalists, and my own
Provings, I have come to the conclusion that there are many things about
Echinacea which ought not to be publicly shared; therefore much info
encountered on this remarkable herb will not be posted here.  For now I think it is enough to say I honor
this medicine.
References:
Personal and Group Provings at Wildflower School of
Botanical Medicine, 2013.
Bergner, Paul.  The
Healing Power of Echinacea & Goldenseal and Other Immune System
Herbs.  Rocklin: Prima, 1997.
DW.  Personal
interview.  5 May 2013.
“Echinacea purpurea, packet of 200 seeds, organic.”  Horizon Herbs.
“https://www.horizonherbs.com/product.asp?specific=449”
8 May 2013.
Hobbs, Christopher.  Echinacea:
The Immune Herb.  Santa Cruz:
Botanica P, 1990.
DW, Interview.
Kindscher, Kelly.
“Lewis & Clark’s Influence on Echinacea.”  United Plant Savers
Journal of Medicinal Plant
Conservation.  Spring 2013: 14.
Linneman, Celia.
“Alteratives and Lymphatics for Cleansing.”  Dandelion Revolution.
“http://dandelionrevolution.com/blog/tag/echinacea”
8 May 2013.
Shore Simms, Trina.
Telephone interview.  ** May 2013.