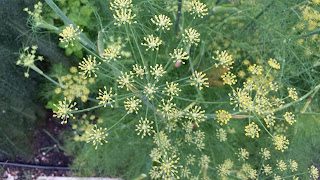 Figuring out Fennel by Alexa Zigman Foeniculum vulgare Apiaceae Here’s a flavor mighty fine Put it in your food sometime The seeds can help reduce your gas Stimulate the G.I. tract Helps with flatulence or colic And also is a diuretic Fennel tincture or the seed Can clear catarrh if you need Mask the taste […] 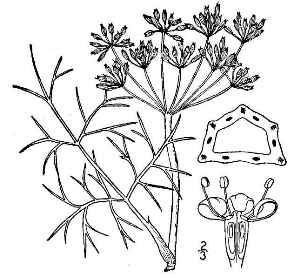 Here’s a flavor mighty fine
Put it in your food sometime
The seeds can help reduce your gas
Stimulate the G.I. tract
Helps with flatulence or colic
And also is a diuretic
Fennel tincture or the seed
Can clear catarrh if you need
Mask the taste of nasty meds
Or if you suffer from bad breath
If bronchitis is on you
A nagging cough it can subdue
For mom who’s nursing Baby Boop
Fennel can her milk, improve
So next time you are out to dine
You’ve had your share of food and wine
If you want to well digest
Dessert of Fennel seed’s the best!
Botanica Poetica, Sylvia Seroussi Chatroux, M.D.

Physical description and characteristics:
Fennel is a perennial herb, often cultivated as an annual for its root. It grows from a juicy bulb, sending out alternately branched layers of frilly, soft leaves on tall , hollow stalks, topped by a golden, compound umbel. It smells sweet, faintly of anise. Will reach up to 4 feet in height. The fruit or seeds are ribbed, a little woody, and contain a high concentration of aromatics. Such a dazzling treat!
Habitat and Habit: Native to the Mediterranean, fennel likes well-drained, sandy soil and sunshine. 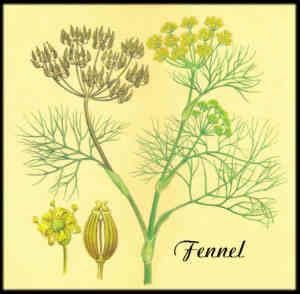 Cultivation: “Sow fennel, sow sorrow.” Fennel is best grown as a border in the garden due to its knack for attracting beneficial bugs, but also because it inhibits growth of other plants.
Parts used: Seeds and leaves, but whole plant is edible,nutritious and delicious. According to Juliette de Bairacli Levy the leaves can be used internally for “the treatment of all gastric ailments, also constipation and obesity. Fevers, cramps, rheumatism, diabetes. Fennel foliage improves memory and is a general tonic for the brain. Hearts of the shoots are a digestive tonic, laxative, and fertility herb.” Her use for the seed follows: “crushed fine and made into a strong tea, speedily expels poison from the blood, therefore should be used after bites from snakes, scorpions, dogs and other animals. Also reduces obesity. Will remove jaundice.”
Constituents: Fenchone; Phenolic compound: Oil-soluble phenylpropanoid- Anethole; Polyacetylenes in roots, which have demonstrated anti-cancer activity and are anti-microbial; Flavonol- Quercetin, which is anti-carcinogenic and anti-inflammatory and anti-allergic.
Energetics: Warm and Moist
Tissue Affinities: Respiratory and GI tract
Actions: 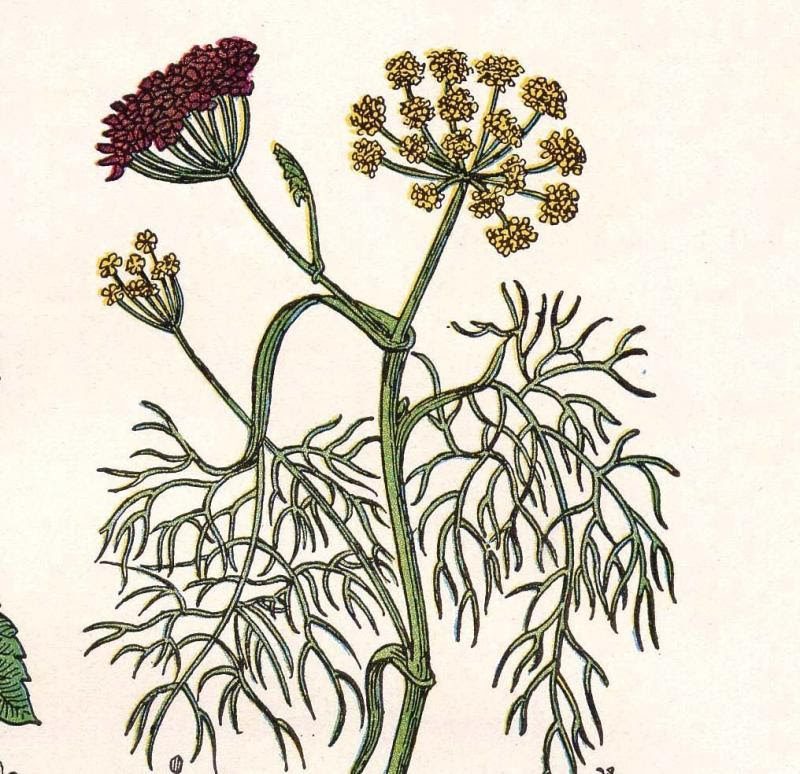 History and Lore: In ancient Greece, legend goes that knowledge came to human beings in the form of a burning stalk of fennel, a symbol of Prometheus who used fennel to steal fire from the gods. The Greek physicians Hippocrates and Dioscorides both recommended fennel to nursing mothers to increase their milk flow. Fennel milk sounds like a tasty treat to me, so it would make sense that a baby should enjoy it too. Fennel was also included in a medieval herb blend called the “Nine Herbs Charm,” which along with a chant was intended to relieve infection and treat poisoning.
Experience: Relieved my pre-menstrual bloating by helping me to expel gas and by curbing my appetite so I didn’t indulge in my cravings, which would have most likely made me feel even worse.

This goblet, wrought with curious art,
Is filled with waters, that upstart,
When the deep fountains of the heart,
By strong convulsions rent apart,
Are running all to waste.
And as it mantling passes round,
With fennel is it wreathed and crowned,
Whose seed and foliage sun-imbrowned
Are in its waters steeped and drowned,
And give a bitter taste.
Above the lowly plant it towers,
The fennel, with its yellow flowers,
And in an earlier age than ours
Was gifted with the wondrous powers,
Lost vision to restore.
It gave new strength, and fearless mood;
And gladiators, fierce and rude,
Mingled it in their daily food;
And he who battled and subdued,
A wreath of fennel wore.
The Goblet of Fire, by Henry Wadsworth Longfellow (1807-1882)