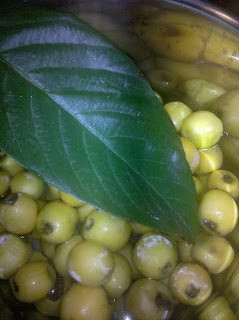 The official latin name for loquats is Eriobotrya japonica the name meaning literally “reed orange”). more commonly known as pipa from the resemblance of its shape to that of the Chinese musical instrument It is in the in Rose or Rosaceae family. Loquats are native to China.  They are a small to medium evergreen shrubby […]

The official latin name for loquats is Eriobotrya japonica the name meaning literally “reed orange”). more commonly known as pipa from the resemblance of its shape to that of the Chinese musical instrument
It is in the in Rose or Rosaceae family. Loquats are native to China.  They are a small to medium evergreen shrubby tree. The tree can grow up to 15 feet tall in Central Texas and is often planted as a landscaping plant.  They have alternating simple tough leaves that are somewhat waxy on top.  The flowers produce a cluster of oval, rounded or pear-shaped yellow or orange fruits about 3 inches long and an 1 or 2 in diameter.  The fruits are the sweetest when soft and yellow, usually by late April into May in Central Texas.  The skin can be peeled off, and the fruit eaten right off the bush, spitting out the seeds.
The fruits are commonly used to make jellies, jams, chutneys and syrups.  Herbalists in Cyprus, Japan,  China, and India have used Loquat leaf tea with some success for various types of cancer, diabetes mellitus, chronic bronchitis, coughs and skin diseases. There is a small book in Japanese called “Natural Remedy” by Yuriko Tojo (1988) that describes various ways to use the Loquat both internally and externally for moxa.  The plant is thought to be anti-inflammatory, antitussive, and a expectorant.  Seeds are  known to contain amygdalin, an anticancer substance that is being investigated.  Plants in the Rose family’s seeds are generally avoided due to potential toxicities, so experiment with this with caution or under a health practitioners guidance.  Specifically,  Chinese medicine uses the leaves of Loquat are used for the treatment of cough coming from heat or dryness in the lungs, with phlegm that is difficult to expectorate; a dry cough with no or little phlegm  I first started using loquats-both fruit and leaf in my cough syrups, because my friend couldn’t afford the prescription that was required to get the cough syrup from a Chinese pharmacy.  I heard her plight, and reflected on the abundance of the trees all over Austin.  We came together and made a fruit mash, added the leaf and other herbs to the mash, infused for many hours, and preserved with raw honey.  Presto, a delicious, local loquat cough syrup.  Since doing this I have tasted a few of the Chinese preparations.  I have found they pale in comaparison not just on effectiveness, but taste and purity.  At least one brand I would be willing to put money on is adulterated with fake corn syrup and menthol flavoring.  I would be surprised if any herbs are in there at all.  The fruit is abundant and people are happy to offer you their fruit.  Be on the look out and try this local fruit out in your next chutney, or jelly recipe!