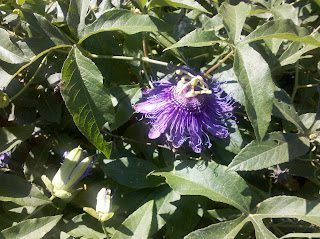 Passiflora Incarnata (Passifloraceae) Monograph Passionflower (Passiflora incarnata) was used traditionally in the Americas and later in Europe as a calming herb for anxiety, insomnia, seizures, and hysteria. It is still used today to treat anxiety and insomnia. Scientists believe passionflower works by increasing levels of a chemical called gamma aminobutyric acid (GABA) in the brain. […]

Monograph
Passionflower (Passiflora incarnata) was used traditionally in the
Americas and later in Europe as a calming herb for anxiety, insomnia,
seizures, and hysteria. It is still used today to treat anxiety and
insomnia. Scientists believe passionflower works by increasing levels
of a chemical called gamma aminobutyric acid (GABA) in the brain. GABA
lowers the activity of some brain cells, making you feel more relaxed.
Passionflower is ecologically intriguing, drop-dead gorgeous, and an
incredibly useful herbal medicine and wild edible.
The Latin word for passionflower is Passiflora incarnata. The effects
of passionflower tend to be milder than valerian (Valeriana
officinalis) or kava (Piper methysticum), 2 other herbs used to treat
anxiety. Passionflower is often combined with valerian, lemon balm
(Melissa officinalis), or other calming herbs. Few scientific studies
have tested passionflower as a treatment for anxiety or insomnia,
however, and since passionflower is often combined with other calming
herbs, it is difficult to tell what effects passionflower has on its
own. Passionflower leaves (Passiflora spp.) are the only food source
for gulf fritillary caterpillars (Agraulis vanillae, Nymphalidae) and
butterfly larvae also feed on passionflower leaves.
Passiflora incarnata plant-ant mutualism is so important to certain
species of plants that their survival is contingent on the presence of
their little bodyguards. Some ants even go so far as to girdle the
twigs of neighboring plants that might otherwise outcompete their
plant friend. Passionflower produces extrafloral nectaries at the base
of the leaf, on the very top of the petiole (leaf stalk), and at the
base of the flower, on the little green bracts (leaf-like appendages
below a flower or group of flowers) below the petals (pictured below
is an ant feeding off the extra-floral nectaries on the bracts below
the flower bud). If you spend enough time with the plant you will see
the ants crawling over the plant and pausing periodically to feed at
the nectaries.
Passiflora closests analog is Ashwagandha.  One study of 36 people
with generalized anxiety disorder found that passionflower was as
effective as the drug oxazepam (Serax) for treating symptoms. However,
the study lacked a placebo group, so it is not considered to be
definitive. In another study of 91 people with anxiety symptoms,
researchers found that an herbal European product containing
passionflower and other herbal sedatives significantly reduced
symptoms compared to placebo. A more recent study found that patients
who were given passionflower before surgery had less anxiety, but
recovered from anesthesia just as quickly, than those given placebo.
During my studies I performed a weeks proving of passiflora incarnata
and found consistent relief of insomnia and anxiety symptoms.
Botany:
Native to southeastern parts of the Americas, passionflower is now
grown throughout Europe. It is a perennial climbing vine with
herbaceous shoots and a sturdy woody stem that grows to a length of
nearly 10 meters (about 32 feet). Each flower has 5 white petals and 5
sepals that vary in color from magenta to blue. According to folklore,
passionflower got its name because its corona resembles the crown of
thorns worn by Jesus during the crucifixion. Passionflower’s floral
arrangement is so unique that early Christian missionaries decided to
capitalize on its distinctive morphology, and use it as an educational
tool in describing Christ’s crucifixion. The name describes the
passion of Christ and his disciples, although in addition, it does
excite passion in laboratory mice, who have demonstrated increased
mounting of non-estrus females. The passionflower’s ripe fruit is an
egg-shaped berry that may be yellow or purple. Some kinds of
passionfruit are edible.
Above the corona rises the androgynophore (translates to
male-female-bearing), which is the shared female and male reproductive
structure. Rising above the short stalk, there are the five stamens
(male, bearing pollen). Above the stamens rests the pistil, which is
the female part of the flower; the pistil is comprised of three parts:
the ovary, resembling a green ball, giving rise to the three styles
and stigmas (female).
Passionflower has an interesting floral reproductive strategy: on any
given plant, some flowers will be functionally bisexual (with fertile
male and female parts), and some plants will be functionally male
(with both male and female parts present, but only the male is
functioning reproductively).
Parts Used:
The above ground parts (flowers, leaves, and stems) of the
passionflower are used for medicinal purposes.
Available forms include the following:

How to Take It:
Pediatric
No studies have examined the effects of passionflower in children, so
do not give passionflower to a child without a doctor’s supervision.
Adjust the recommended adult dose to account for the child’s weight.
Contra-indications/ Side effects: {x} bradycardia; hypotension;
concurrent use of pharmaceutical sedatives.
According to Mills and Bone[xi], passionflower is in the following
category of herbs:
Drugs that have been taken by only a limited number of pregnancy women
and women of childbearing age, without an increase in the frequency of
malformation of other direct or indirect harmful effects on the human
fetus having been observed. Studies in animals have not shown evidence
of an increased occurrence of fetal damage.
In the American Herbal Products Association Botanical Safety
Book[xii], Passionflower is not contra-indicated in pregnancy or
lactation.
In Herbal Medicines, third edition {vi}, Barnes et al report no
recorded drug/herb interactions, however a hydroalcoholic extract was
reported to potentiate rhythmic rat spasms in isolated rat uterus, and
based on these results, the author’s caution against using
passionflower in pregnancy.
Pregnancy: [viii] [ix] headache and pain, in general; prevention of
herpes outbreak; hypertension; help with insomnia and exhaustion in
postpartum depression; insomnia and anxiety. Please see the notes in
the contra-indications section regarding passionflower’s safety in
pregnancy.
Indications/Usages:[vi] [vii]
Nervous system/antispasmodic: insomnia, anxiety, anxietous depression,
hypersensitivity to pain, headaches, agitation, transitioning from
addictions, tics, hiccoughs, overstimulation, nervine tonic in
preventing outbreaks of the herpes simplex virus, stress-induced
hypertension, and menstrual cramps. The mandala-like flower
demonstrates the powerful signature of its use in circular thinking,
especially during insomnia; passionflower is especially suited for
folks who have a hard time letting things go, mulling them over
incessantly in a repetitive manner.
Children: insomnia; trouble sleeping through the night; teething;
colic; adjunct treatment in asthma; especially with panic around
asthma attacks; whooping cough.  See the notes below on calculating
dosages for children.
Determining dosage in children by weight:
To determine the child’s dosage by weight, you can assume that the
adult dosage is for a 150-pound adult. Divide the child’s weight by
150. Take that number and multiply it by the recommended adult dosage.
For example, if your child weighs 50 pounds, she will need one-third
the recommended dose for a 150-pound adult. If the adult dosage is
three droppers full of a tincture, she will need one third of that
dose, which is one dropper full (1/3 of 3 droppers full). A 25-pound
child would need one-sixth the adult dose, so he would receive one
half of a dropper full (1/6 of 3 droppers full).
Adult
The following are examples of forms and doses used for adults. Speak
to your doctor for specific recommendations for your condition:

•       Tea: Steep 0.5 – 2 g (about 1 tsp.) of dried herb in 1 cup boiling
water for 10 minutes; strain and cool. For anxiety,
drink 3 – 4 cups per day. For insomnia,
drink one cup an hour before going to bed.
•       Fluid extract (1:1 in 25% alcohol): 10 – 20 drops, 3 times a day
•       Tincture (1:5 in 45% alcohol): 10 – 45 drops, 3 times a day
Precautions:
The use of herbs is a time honored approach to strengthening the body
and treating disease. Herbs, however, can trigger side effects and can
interact with other herbs, supplements, or medications. For these
reasons, you should take herbs with care, under the supervision of a
health care provider.
Do not take passionflower if you are pregnant or breastfeeding.
For others, passionflower is generally considered to be safe and
nontoxic in recommended doses.
Possible Interactions:

Antiplatelets and anticoagulants (blood thinners) — Passionflower may
increase the amount of time blood needs to clot, so it could make the
effects of blood thinning medications stronger and increase your risk
of bleeding. Blood thinning drugs include:

Monoamine oxidase inhibitors (MAO inhibitors or MAOIs) — MAO
inhibitors are an older class of antidepressants that are not often
prescribed now. Theoretically, passionflower might increase the
effects of MAO inhibitors, as well as their side effects, which can be
dangerous. These drugs include: