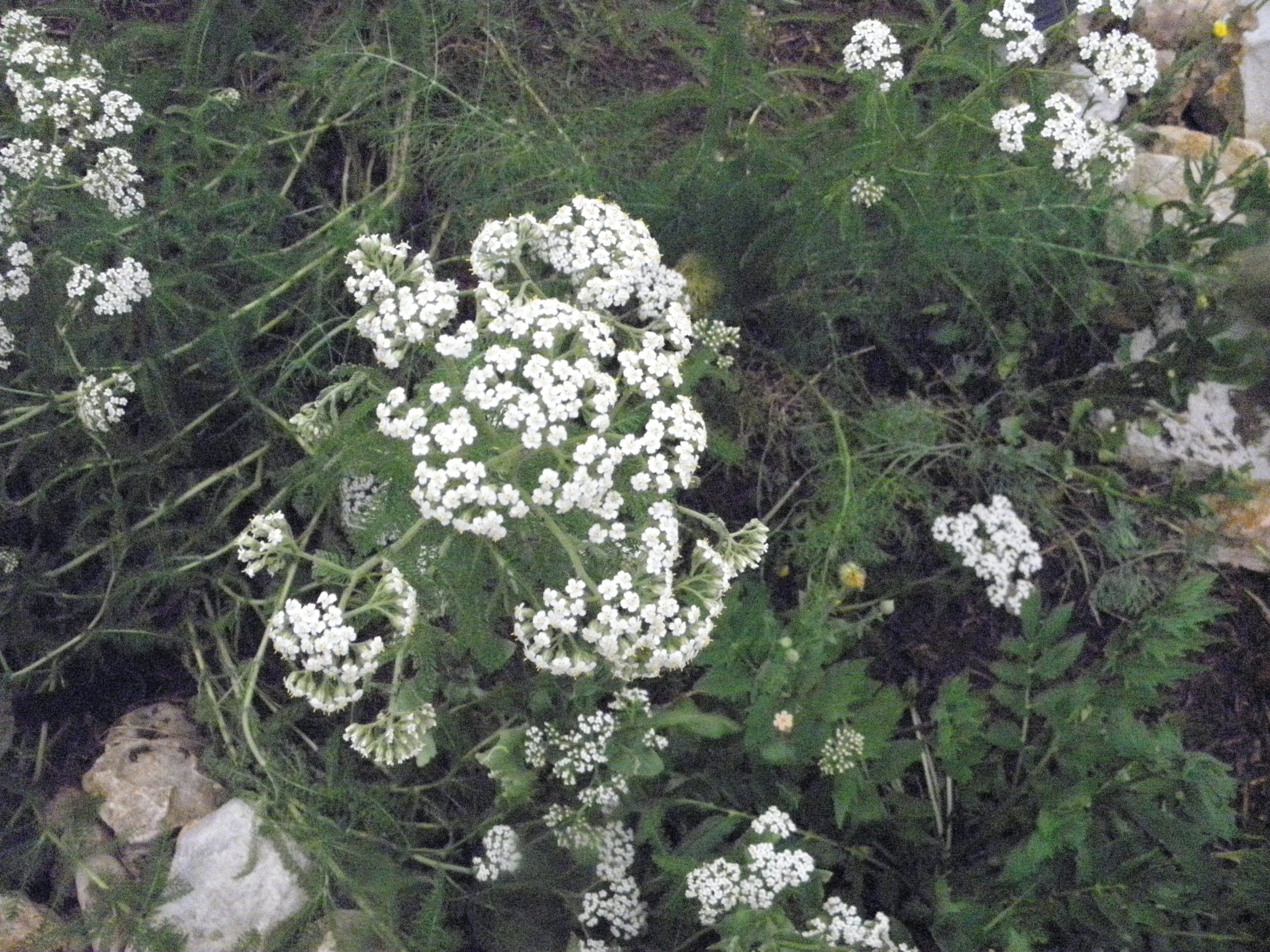 ~Eli Young 2015
Dear Yarrow,
You are an old friend in your ubiquity. Following my travels from shore to shore, I feel we walk a similar road. I hear your name from the annals of Greece and England, India and China. Named millefolium for the apparent million leaves and Achillea for the original wounded warrior, my blood cells stand at attention.
Also Known As
Milfoil, nosebleed, old man’s mustard, poorman’s pepper, staunchweed, yarroway, woundwort; these are some of the many telling common names for Achillea millefolium. A common plant in the pharmacopeia of First Nations people of the Americas, the Ojibwe of the North called it Squirrel-tail or something to the the effect of atchitamo. The Teton Dakota called it tao-pi-pezu’ta or medicine for the wounded. The former name most likely regards the apparently fuzzy, erect tail-like leaves while the latter refers to the actions of Yarrow. In Sanskrit, it is referred to as Thousand Leaf Gandana and the Chinese call it Ichi Kao. The name Yarrow is a corruption of the Anglo-Saxon name for the plant – gearwe; the Dutch, yerw.
The Journeys of Achillea
Achillea is found throughout the world today but its origins are in Europe, Asia and North America. The plant has the tendency to slightly change its morphology and chemical composition depending on its location. For example, some subspecies have developed that have a different number of chromosomes than the most prevalent Achillea millefolium.
Achillea in Action and Local Accounts
Known throughout the world today and yesterday as a powerful styptic and blood mover, Yarrow was often found and used in battlefields of early wars. Achillea can be best described as a diaphoretic, vulnerary, vasodilator,styptic, astringent, tonic, stimulant and mild aromatic.
Local astrologer and plant whisperer, Brenda Francis, felt my Yarrow tincture resonate in the solar plexus and was, “ready to face battles having already won the battle with fear”.  She also heard the plant imply its usefulness in recovery from shock.
Local plant tender and medicine maker Brittany Benton uses Yarrow internally to encourage menstruation and externally as a skin toner and wound styptic.
These modern day accounts are very much in line with traditional uses for Yarrow beyond the field of battle. Achillea helps stimulate appetite in cases of disease or anorexia and can repel some insects when the leaves are rubbed on the skin. Additionally, there is evidence that Achillea helps speed up the breakdown of solids in compost and helps increase disease resistance in garden plants when places in their vicinity. In my research, I  found also found several accounts of it people washing their hair with it to prevent baldness.
“Mythology”
As the story goes, when the Greek hero Achilles was born, his mother held him by the heel and dipped him in a vat of yarrow tea to protect him from harm. He eventually died by a wound on the ankle where the yarrow had not touched. It is also said that Achilles was trained in the uses of Yarrow on the battlefields of Troy by his teacher, Chiron the Centaur healer.
Botanically
As a member of the Asteraceae family, the Achillea flowers are found in flat  clusters of disk and ray flowers. The inflorescence is arranged in a flat top formation and the fruits are small achenes. The leaves are arranged evenly along the stems in bi-pinnate to tri-pinnate fashion. The leaves are opposite and covered in varying degrees of pubescence depending on the species or environment of growth. Leaf growth is basal for most of the year until flowers shoot up in tall stalks from April (Texas) to September (colder climes).  While flowering, plants vary in height from mere inches in more open areas to four or five feet in forest environments.
Energetically
In the world of energetics, Achillea is known as warm as welll as cool and drying.
Astrologically
Achillea is a plant associated with Libra, and is influenced by Venus, Mars and the Moon.  It has an affinity to all the chakras.
Esoterically
In my research and study I found many accounts of the spiritual protection in the case of professions where one might pick up on other people’s energies. It has been recorded that clairvoyants in France and Ireland believe that placing Achillea leaves over the eyes can aid in their work. It has also been documented as one of the herbs dedicated to the “Evil One” in earlier days, being sometimes known as Devil’s Nettle, Devil’s Plaything, Bad Man’s Plaything, and was used for divination in spells.
Personal Practice
In my herbal experimentation I made a tincture, a tea, a smoke blend, a hydrosol, and a poultice from the leaves and flowers of Achillea. The tincture I take right before and during my period to help move the flow and get it out more quickly as well as during to alleviate cramping. As a poultice, I chewed the leaves and put them on a flea bite and the itching stopped. I have not read about using yarrow for this purpose but it seems to work as a drawing remedy in addition to all its other uses. This is probably owing to its astringent properties. I often use the hydrosol on my face as a toner and when added to the smoke blend, it was slightly stimulating. The tea was also stimulating and quite bitter implying action on the digestive system.
To Be Continued
A longtime ally and friend, I have not even begun to scratch the surface of the wonders of Achillea millefolium. I will continue to listen and grow with Yarrow for my entire life. There could be an entire book written on this plant and its many uses. There is so much to learn.
Bibliography
X