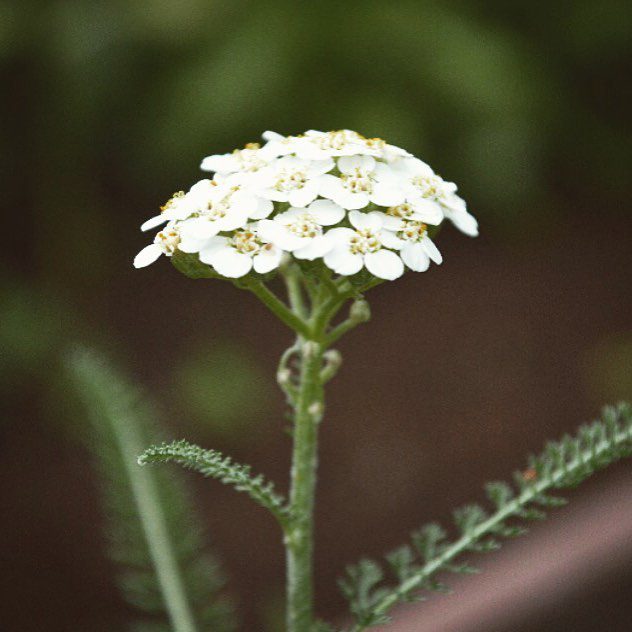 by David Gray Wildflower School 2012
INTRODUCTION
I had first heard of yarrow (Achillea millefolium)
years ago when I was taking Kung Fu and reading a lot about Chinese philosophy
and tradition, including the I Ching (Chinese divination).  Because of yarrow’s purported magical/spiritual
properties, the divining with dried yarrow stalks was the preferred method
before the use of coins.  I had long
forgotten about yarrow when 20 years later it would be my randomly selected
research herb.  Interestingly, soon after
being assigned yarrow, I had a vivid dream of lying on the ground with a plant
that was unmistakably yarrow.  I almost
never remember my dreams and as of this writing, three months later, I have yet
to have any other dreams about plants, yarrow included.
I started my research with selected readings by master
herbalists and other authors of books on alternative medicine that discuss
yarrow in their works.  I then
interviewed two local herbalists who have both used Achillea millefolium in their own practices.  Finally, I obtained samples of the plant for
my own use and observation.
INTERVIEWS
Anne Merrill
I interviewed Anne on April 30th, 2012.
Anne mentioned that outside of Yarrow’s common use as a
blood mover (usually to treat a bleeding wound) that it is difficult to use as
a tonic.  The reason, she says is that
most people cannot get past the taste, and will not use it for an extended
period.  However, when mixed as a
fractional part of a remedy where the taste is less of an issue it can usually
be employed without complaint.  Anne says
that her primary use of Yarrow is to prove to doubting clients the
effectiveness of herbs by showcasing its styptic qualities.
BobWölfé Jung
I interviewed “BW” on May 7th, 2012.  BW said that in his practice, there were two
calls for Yarrow.  The first, being in a
first aid capacity; topically, to staunch the flow of blood when someone has
been deeply cut.  In fact, he had used it
on someone who had been cut to the bone, and it had effectively done its
job.  He mentioned a similar thought that
Matthew Wood had expressed in his book, that if you observe the leaves of the
Yarrow plant, that it appears that the webbing of the leaf structure has been
“cut back to the veins”.
BW’s second use for Yarrow is for patients who have mostly defeated an internal
infection, but there still remained a stubborn, lingering remnant, hiding deep
in the physiology that was not wiped out in the general treatment.  For this, BW suggests using Yarrow as a
diaphoretic to energetically force the latent infective upward and outward,
hoping to weaken, expose and expel it.
His suggested method, just before bed, the subject should drink a hot
infusion “as hot as the subject can stand to drink”, followed by a hot shower
(again as hot as possible), then to bed wrapped in as many sheets and blankets
as possible.
PERSONAL EXPERIENCE
First I bought a potted yarrow plant from the neighborhood
nursery.  A $2.75 investment in a healthy
plant that I would not have to dig up myself.
So, I keep handy when reading about yarrow or using yarrow as a
medicine.
Anne Merrill provided me with a yarrow tincture and enough
of the dry herb to make tea and a sitz-bath.
On the first day, I decided to make a yarrow tea.  On a side note, I did not own a teapot, so I
stopped by the thrift store to buy one for my yarrow experimentation.  I lucked out and found a clear, blown-glass
tea-pot with a strainer/plunger for $4, which a little Googling revealed was a
$45 “Shen-Cha” teapot!!  I infused a strong
tea with the dry herb using the guidelines in the tea-making chapter in Rico Cech’s
book: Making Plant Medicine, with 30 grams of dried herb to 32 ounces of
water..  I drank the tea slowly and tried
to focus on what, if anyhow the plant affected my physiology.  My first thought was, “This tastes like
shit.”.  Though it’s aroma was pleasant
like the fresh plant itself, the taste was very bitter, pungent and medicinal,
but at the same time I kind of liked it.
I first thought the after-taste was like an artichoke and similar to the
Calendula tea we had in our first Materia Medica classes at the American
Botanical Council.  A little research has
revealed that they are all three in the Asteraceae family. So, right or wrong,
I have come to associate that specific taste with the Asteraceae family.  At the time I was drinking the tea, I felt
that my physiology was already in relative balance, so perhaps that is why I
did not feel much more than the warming and slightly diaphoretic effect.
On day two, I tried a single drop of the tincture to which I
felt no noticeable effect.  I increased
the dosage each following day, 3 drops, half-dropper, full dropper, two dropperfuls.  None of these internal dosages seemed to have
any notable effect on my body or mind.

On May 10th I had outpatient dental surgery, which resulted in some
notable trauma the gums surrounding my front two eye-teeth.  Swollen and irritated, they would readily
bleed with the slightest brush of my tongue or lips.  So, I figured I would see how yarrow would
work.  I applied several drops of the
tincture directly to my gums and sure enough I could not coax my gums to bleed
again and the next morning the swelling and most of the pain was gone. I put a
couple drops more on for good measure and by the next day they were healthy
& pink with no discernable signs of trauma and I could even brush with my
vibrating, electric-toothbrush with no problem.

Flipside Arts Festival (April 24th-28th,
2012)
During my stay, camping out at Flipside, I kept a small herbal
1st Aid kit with me that included my Achillea tincture.  Unfortunately (or fortunately) I did not
encounter many deep cuts, and the cuts I did encounter were several hours
old.  The only exception was a camp-mate
who scraped her arm, which was bleeding a little.  I warned her that the tincture contained
alcohol, which she assured me hurt a Hell of a lot more than the scrape,
itself.  However, the bleeding did slow
to a stop in less than two minutes.  My
camp-mate even squeezed the wound to try to get it to bleed, but it was
completely staunched.

The other, more impressive case was with Someone Who Isn’t Me (SWIM) that took
the drug 3,4-Methylenedioxymethamphetamine (MDMA) also known as “Molly” and
“Ecstasy”, amongst other things.  SWIM
has taken MDMA numerous times in the past and a common side-effect is
ulceration on the roof-of-the-mouth and tongue, possibly from acidosis.  As expected, within 12 hours of taking MDMA
small, painful, ulcerated blisters formed near the back of SWIM’s palate.  Ulcers were inflamed, some with small white
“heads” and some   Though the blistering
is relatively minor, the location makes it difficult for SWIM to eat.  In the past, SWIM had tried standard remedies
for this, including gargling with salt-water and/or mentholated mouthwash and
using mentholated cough drops.  This
usually satiated SWIM’s discomfort to a tolerable level, outside of eating, and
the symptoms would usually subside within 48-72 hours.

SWIM was given 1/3rd dropper of Yarrow tincture
to gargle.  According to SWIM, within
seconds all pain in his mouth stopped (and never returned).  On inspection, the bleeding ulcers had been
staunched and the red irritation subsided.
Within an hour there was no trace of ulceration and only a slight patch
of pinkness.
X